Well folks, what a great few weeks of football. In the span of the last three weeks three top-five teams have been knocked off. So really who is fit to challenge NDSU for the National Title? UNI played close with them, but then dropped an egg against a better-than their record SIU. Towson has struggled with its colonial brethren. It looks like a potential re-re-match of SHSU vs NDSU may be in the works as SHSU drubbed then no.2 EWU, however SHSU struggled against a Lamar team that has of yet been unimpressive. While NDSU pulled it out against UNI it appears that yes they can be beat, but will a team put together a complete game and take the W from the Bison? I know that this year is going to remain very interesting when it comes to the playoffs, hold onto your hats lets have some fun.

So its week 6 and we know a heck of a lot more from week 5. Gardner webb beat their d2 pretty handly, we will reserve judgment till after this week. I want Saturday to be here so I can watch football and drink beer.

As it is picks this week, last week we went 2-3(freaking bigsky)
This week we have a lot of good action:
#1 NDSU vs #4 UNI-UNI with David Johnson leaping over several defenders to convert a game-winning tw-point conversion as the game ends 15-14. Defense, and whoever has the ball last keys to the game.

#22 UNH vs #2 Towson, I have been a Towson doubter for the most of the season, yes that conneticut win was ok, but its looking a lot like UNI’s win over ISU(FCS over crappy FBS team) this game I think will show how good of a team Towson is. Towson 23-14.

Southern Illinois at #9 SDSU-in Carbondale the egyptaion flying dogs who eat children win, since its in Brookings SDSU 28-24.

That’s it boys and girls, have fun be safe and we will see you next week.

Alright, so this week after realizing hey someone actually reads this maybe I should put something worthwhile up(call it a EV VS WC) hangover that I could not come up with anything, then while perusing the boards this AM, a point of interest was brought involving a school that I had only ever heard a little about Gardner-Webb. Apparently some of their fans are in a tizzy because they feel “disrespected” because while they have beaten Furman, Wofford, and Richmond they are merely ranked #25 and the question was asked is their a bias towards the power teams conferences vs. the small time conferences? Honestly for this blogger, yes there is(full disclosure this blog nor does this writer participate in any poll) Coming from “smaller schools”(with the exception of Montana North and South Dakota and maybe Maine, we always have to prove ourselves to our older “brother” institutions. Beating three power teams by a combined 15 points(one by three and another by two) to me is not enough to really show that you have “arrived” like many poster on this board when they vote they take in the “body of work” we have all seen teams start fast and then die out towards the end of the season, while I am not saying GW is going down that path, but I feel #25 is right for the time being, you made the top #25 for your current work, as you continue to demonstrate your winning, more respect is given. Just my 2 cents.

My predicts for this week top matchups:
#1 NDSU vs #6 SDSU-NDSU goes into SDSU and wins a squeaker of a game 17-16 over the Jacks.
#2 EWU vs #4 SHSU-I again applaud high-quality FCS teams scheduling other High-quality FCS teams as non-cons, that is what our division needs to keep itself strong. I picked against SHSU the entire playoffs last year(except the chipper) Well, this one I think the Eagles take 24-13.
#5 UNI vs #9 Mcneese- Alot of talk on this one, I feel that people have been hesitant on UNI despite their 3-0 record apparently the wins weren’t “flashy” or “big enough” over programs like drake and Northern Colorado. I think the playbook will be opened up against Mcneese, David Johnson will be allowed to pound the ball, while Sawyer will keep the DB’s honest with a balanced passing scheme, UNI wins this one 32-17. Call me a homer, when you write the blog you can be a homer to.
#14 JMU vs DEL-Honestly I think this will really show what type of season these two teams will have, JMU almost beat akron but also barely beat SFPA, while Delaware has woodshedding all comers except their own woodshedding from a mediocre Navy team(go Middies) I think this one will be close and whoever has the ball last wins this one 42-40 James Madison.
#7 Montana vs #24 NAU-Montana 38-17

So this is something that has probably been discussed, re-discussed, and just for hecks sake re-hashed, well I have been thinking about this-with the recent defections from FCS to FBS of some powerhouse programs has the EC fallen behind the WC? After 8 straight EC championships the WC has claimed 3 straight with no EC team getting beyond the semi’s. The balance of power took a major shift west when perennial powerhouses Georgia Southern and App State announced their impeding departure from FCS, especially with recent resurgence of programs such as UNI, Montana, and Eastern Washington, not to mention the appearance of 2-time defending champ NDSU. This case was very obvious that the WC is superior to the EC when only one team in the top ten was an EC school. The NCAA may have been ahead of the game in moving the national title game away from the East coast and into a more neutral location. Feel free to post your thoughts.

Is it or Isn’t it? Is the FCS closing the gap to what is essentially the bottom half of the BCS. One could argue with the recent “upsets” of BCS teams by FCS teams that yes the gap is closing, however this blogs feelings are such that while the gap is closing in fact it is actually spreading, as the “elite” teams of the conferences are getting further away with their lavish facilities, expensive coaches and the like. While your Iowa States, UConns, and South Florida’s are just trying to fill their stadiums. Yes we are beating BCS teams but they again are those bottom dwellers in the conference, Not trying to take away from the wins, but when one of these teams goes undefeated I will be more impressed then what I am now, because honestly I would have been DISAPPOINTED if UNI hadn’t beaten ISU, I would imagine that most of those team’s fans would have been the same way, hence is it really an upset if you feel you should win. I digress, football season has come all is right with the world.

Feel free to agree/disagree post or give your thoughts.

So when I took this job, I told Chris I would write once a month in the offseason, yeah that worked. Getting married, promoted, and buying a house gets in the way, but not sure those are valid excuses, here we go. Its almost time for the best of all times of the year, the football season(though by the weather in the Midwest you could be fooled into thinking it was October already) But alas, I am beginning to dive into conference reports, and here shortly I will make the Cs.com predictions for the season champs/standings. If you have some insider information feel free to post, and comments are always welcome. On a side note, what’s your circle game this year? For this Panther fan, it is definitely the NDSU game in Fargo, as much as we despise some of the Bizon fans, they have shown up and have represented the Valley conference and if UNI wants to get back to the pinnacle of FCS, the road goes through Fargo this year.

Alright football fans well basketball season is over so fortunetly that means one thing SPRING. Which only applies to those living in the south or on the coasts because Winter has decided to go straight to summer(no joke here in iowa its supposed to be 40 degrees today and seventy five on saturday) anywho what to write about, I think the biggest thing is the new “playoff” system in FBS and moving up to FBS. Because I feel more for the latter topic I will start there, whats with all the movment up, do you really think you are going to make more money at that level then you are now? okay, you are going to get more for FBS games, but playing in half-empty stadiums for all of your other games while at the end of the season your hope is to play in abowl game that no one cares about. I just have a hard time wrapping my head around that. Tying into that FBS you guys have successful marginalized your “playoff” system you didn’t want to get rid of the bowls your cash cows, but by having the lamest name ever you have reduced it even further escpecaillyw ith your archaic lock-out requesrments denying equal access to the “other conferences” Whatever. When is football season here, I’d rather complain about how this happened, or rankings as opposed to this stuff.

Alright boys and girls its time for the Championshipsubdivision.com blog’s title game prediction, we have the bearkats and the bison part 2. 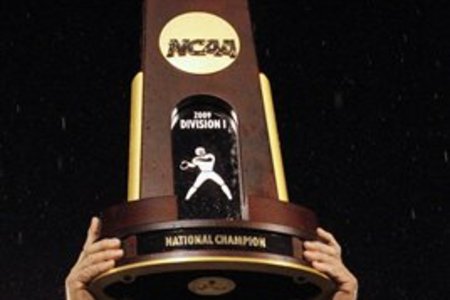 The thing we are all playing for

This has been a tough call for me and I really have gone back and forth on this one. So here it is on the one hand I have been picking against the bearkats all playoffs long and as those brilliant bearkat fans like to point out how wrong I was AFTER the game(not a peep prior to two of them) while you have NDSU who has just put down dominant perforamance after dominant performance on the other. I have my brain that says NDSU but my heart thinks the road the bearkats have gone trhough has prepped them for this game. With that being said

We will see you after the game feel free to make a predicition, however any poster who feels the need to post about how wrong I was without posting something prior will have their comment deleted(because you really look like a moron)

Well I took some flak from the bearkat fans for picking against them for two straight weeks, but I guess you have to hand them the big sky crown for beating the three top teams in that league to setup a rematch against North Dakota State. I honestly can’t predict who is going to win this one, so football fans enjoy the meaningless bowl season while you await my predict to come shortly before the title game.